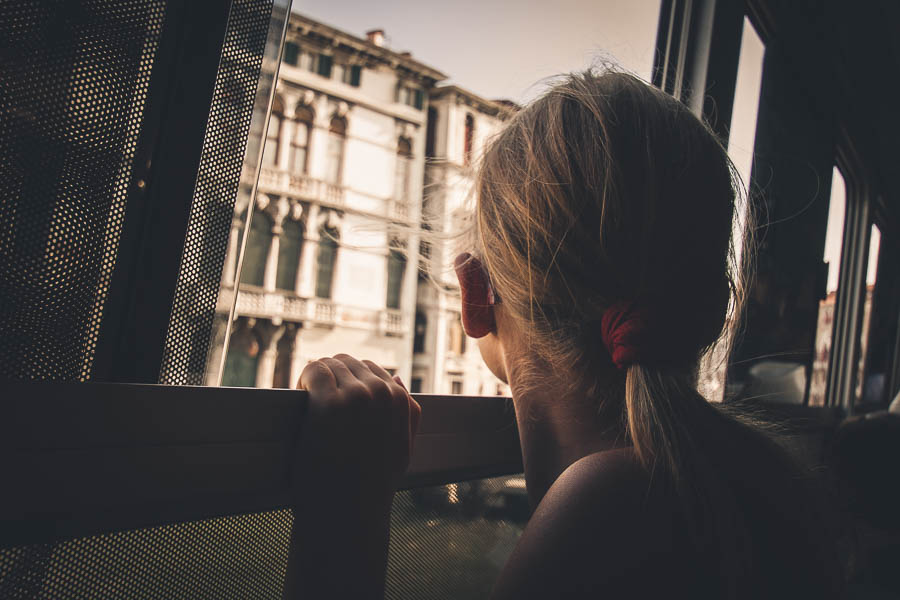 Taken inside the Vaporetto to St. Mark’s Square. 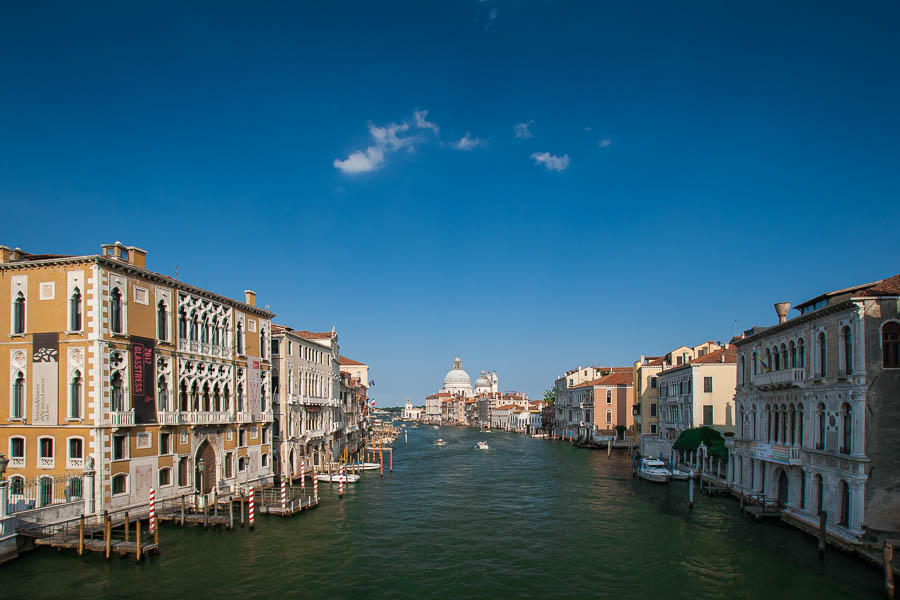 The view from Ponte Accademia. Another classic photo spot in Venice. Best time would have been around sunrise, but as said before, we were focussed on the evening hours. Still a nice picture. 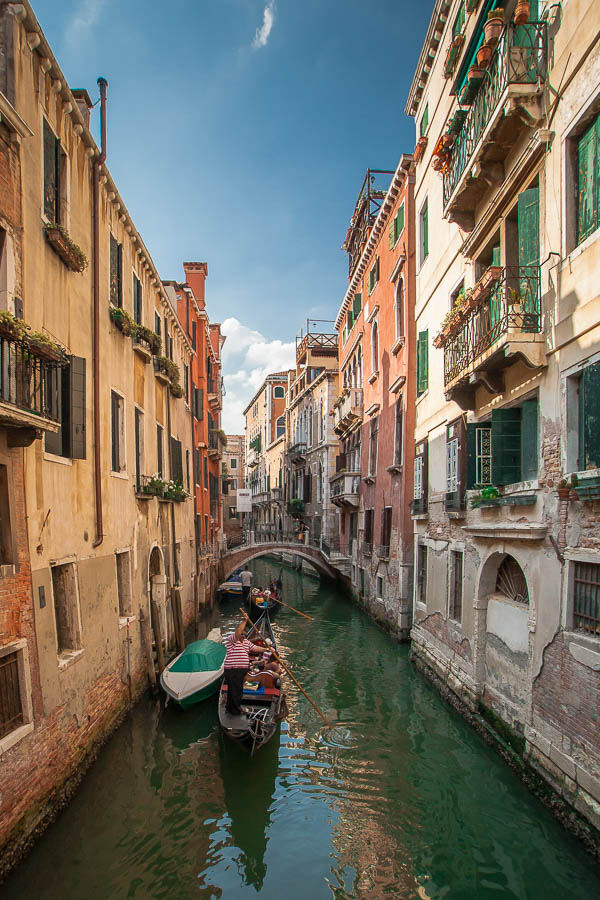 Gondoliers floating tourists through the narrow canals in Venice 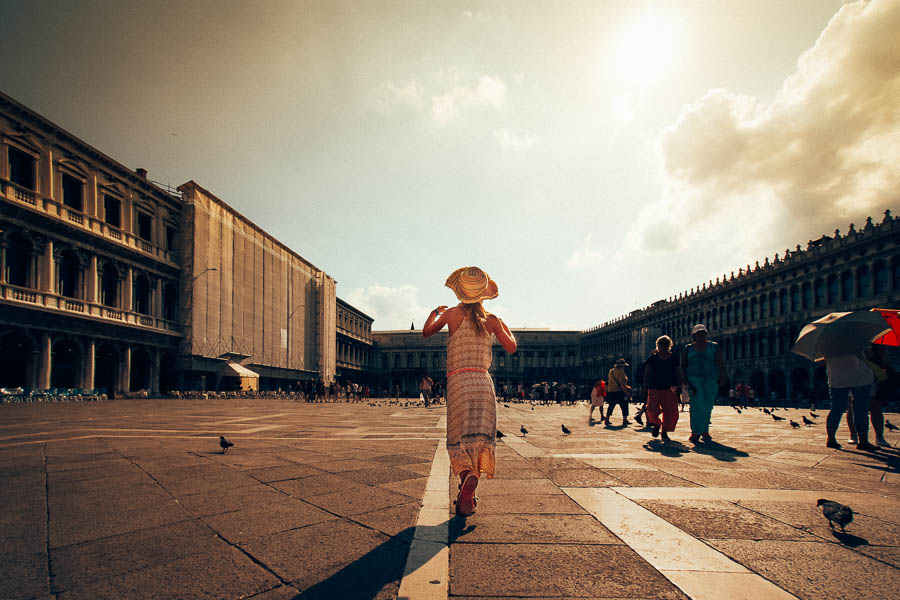 This is definitely one of my favourite photos, taken this summer. Would have been better without other people and some pigeons flying away, but hey. 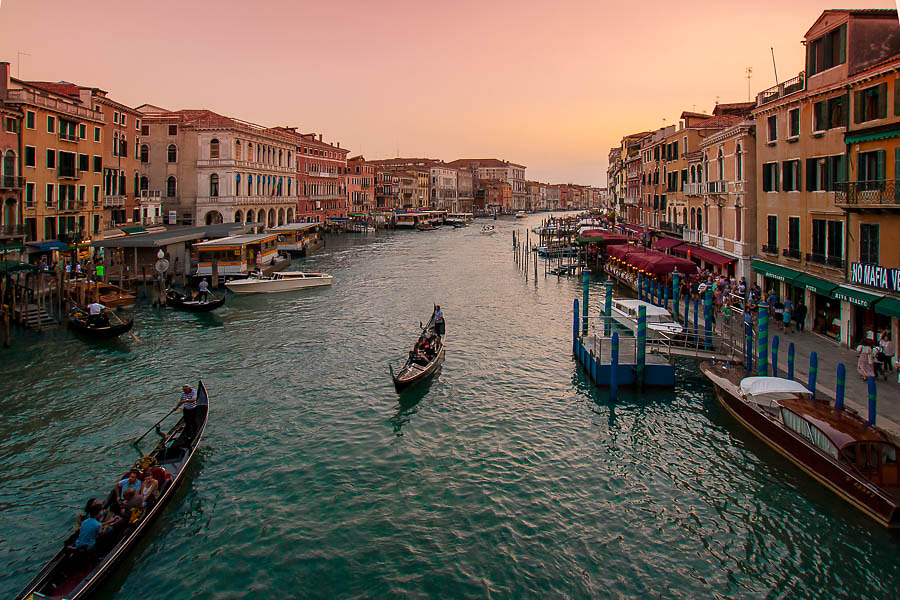 I have been to Italy a few times in my life. Among smaller cities I was in Milan, Florence, Genoa and Cagliari. I have even seen their state printer from the inside. Okay, I just mention this to have something to tell about Rome. But I never was in Venice before. This time I closed that gap.

As on other trips before, we used the evening hours for sightseeing. Benefits: Most day tourists are leaving in the afternoon and temperatures are getting more comfy every minute. Especially in smaller Italian cities, street life wont start before 7pm. And of course, the advantage of the golden hour for taking photographs.

The trip: Spending the day in an air conditioned mall in Mestre (Italy trip without fashion shopping is no Italy trip), later then a short drive to the pre-booked parking lot at Mestre train station, followed by a 10 minute train ride and we arrived at Venice St. Lucia station around 4pm. An easy and stressless way to get there. when queueing up for Vaporetto tickets, some Germans appoached us and offered their day passes, for free! They where already leaving and they would become useless for them anyway. What a gift. Thank you!

We jumped on a Vaporetto which brought us to St. Mark’s Square. Then we were strolling through Venice via Academia and San Polo to the Rialto-Bridge. Another Vaporetto took us back to the station.

This photo was taken from Rialto-Bridge, shortly after sunset.

Tip: later we learned, another way to get to Venice is by Ferry from Fusina. In my oppinion the perfect way. Could there be a better way to enter a city, built on water, by coming over water? 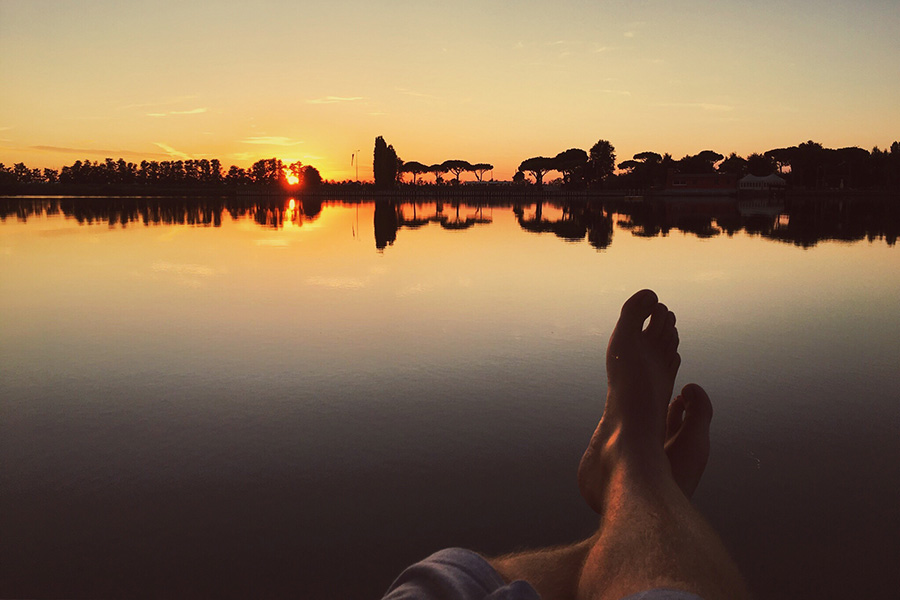 Is there anything more beautiful and meditative than sitting on a landing stage, watching the sunset and the calm lake looks like a giant mirror. The beginning of a tropical night. I wanted that so much. And I already miss it. 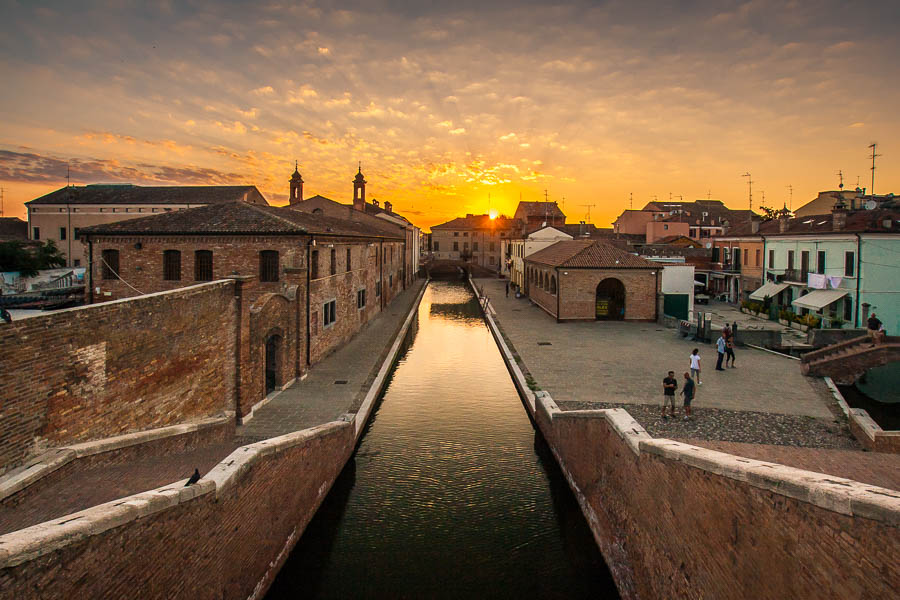 Italy, Summer. Nothing else to add. Okay: best Italian food and gelato I had in my life so far.

Sunset over the small town of Comacchio, seen from its famous bridge “Treponti”. 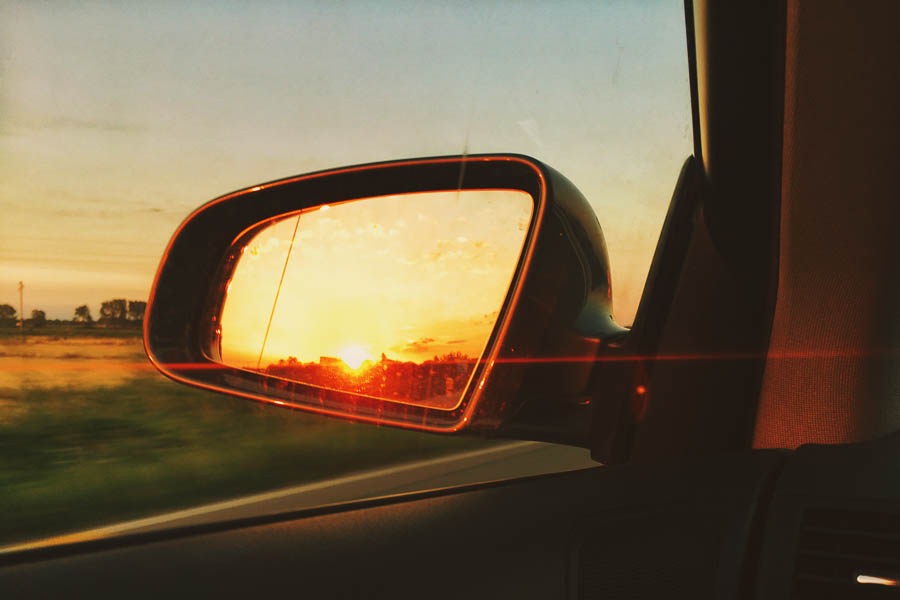 A perfect summer day ends. I am obsessed by those “sunset in car mirror” shots. Together with the perfect song, this creates the atmosphere of road trips. 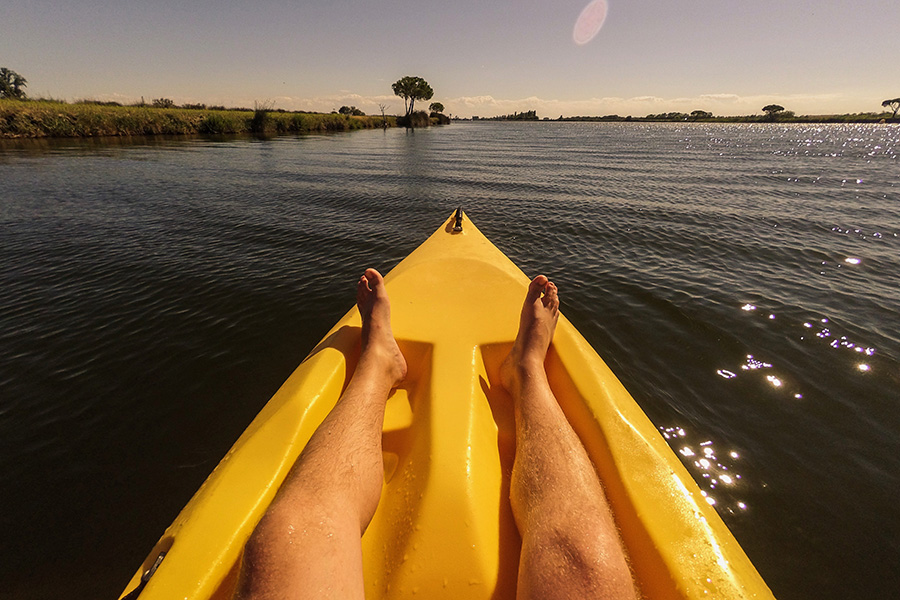 Better a fun kayak than no kayak. Never imagined river Po when thinking about kayaking. Not that bad. Plenty of water in branches of rivers and lagoons. Plenty of midges included. Its also possible to go from delta del Po national park to Venice by Kayak. Idea: with a folding kayak to Venice… reminds me about our 1996 Trabant trip through Tuscany. 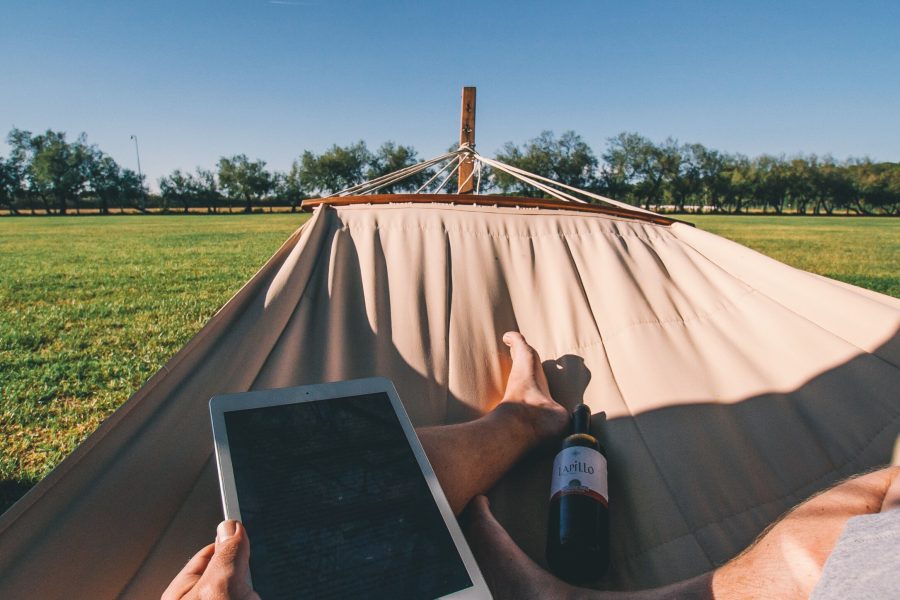 This is how I imagine qualitiy time in Italy! After been to Trentino, Lombardy, Tuscany and Sardegna, I gave Emilia Romagna a try. In particular the delta of river Po. Never expected such great nature when thinking about river Po. A nice place to be.